Jim Crow Is Back In Style 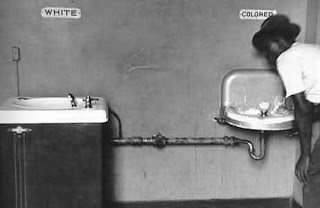 The swimming pool incident takes my mind back to when I was young. Restaurants did not serve or allow Blacks. We would stop on the side of the road to use the restroom rather then go through a degrading, humiliating, anxiety ridden experience of using restrooms with blacks only signs on them—the sign another label for those guilty of desiring to be treated like human beings instead of animals.

The Civil Rights Bill passed in 1964.

"It prohibited discrimination in public facilities, in government, and in employment, invalidating the Jim Crow laws in the southern U.S. It became illegal to compel segregation of the races in schools, housing, or hiring. Powers given to enforce the bill were initially weak, but were supplemented during later years." ~~Wiki~~

It has become increasingly clear that they do not want to share the many opportunities America has to offer with minorities. Nor do they want to acknowledge the many accomplishments that any minority has achieved. Educational books used to teach our children are lily white, filled with achievements and accomplishments of Whites only as if to say no other race existed outside of forced servitude or their many conquest. Of course, much of the sordid, trickery, barbaric methods, and brutal details involved in forced servitude or their many conquests were left out and painted as glorious missions of civilizing those uncivilized savages.

On the other hand, we have black youth who have been Scarface indoctrinated and seem to think the way to settle their disputes is the old Al Capone way by killing each other. Moreover, urban America is held hostage by some wannabee Scarface clones that are getting on everyone’s last nerve and making White folks nervous and gearing up with guns up for the black takeover that Fox is telling them about.

Was the Civil Rights Bill a deceptive tool used to hoodwink black folks—a pacifier for a promise they never intended to keep—a sham? On the other hand, is it that you black people just do not know how to act and are destroying America and all the patriotic ideals it stands for? After all, you elected a Black President and he is not even born here according to the GOP folks. Bringing Jim Crow back ought to teach you Black folks a lesson and keep you from destroying American. Can we just sit down and have a real honest dialogue about race relations in America?
Posted by GrannyStandingforTruth at 11:34 PM 16 comments: