Mitt Romney and the GOP claim that they want a better America. Okie dokie, but for whom do they want this better America is the question. Without a doubt, the poor, disabled, women and grandma and grandpa are not included in their equation.

Sean Hannity said to let the poor eat beans and rice. Well, we expect a  scumbag ex-bartender, school dropout to say something like that. Hannity is out of touch with humanity. Rupert Murdoch and Roger Ailes made him a millionaire for his lying abilities and it has went to his head. Murdoch and Ailes will make a millionaire out of anyone with lying capabilities and Hannity is a born liar.

Getting back to Romney, he is quite a unreliable and fickle character. Yep, he changes like the wind. Not only that he does not mind stepping on poor people to make a profit.

In 1989, Romney led Bain Capital's purchase of Damon Corp., a medical testing company, and took a seat on the Board of Directors to better manage it. During Romney's four years, Bain tripled its investment, and Romney personally made $473,000 -- while Damon plumped its profits with Medicare fraud (running thousands of medical tests doctors didn't want, and billing Medicare for them). ~~Skeletoncloset~~


While I'm at it, I thought I'd mention a little something about our little nasty, vile, racist, pesty trolls. Here is a video regarding trolls who get their jollies preying on Internet blogs. Not only do they prey on black blogs they do it with all types of blogs. Well...BBC tracked down a troll. This video will give you an idea of what type of people they are.
Internet "trolls" are generally anonymous provocateurs who invade forums and comment sections for the primary purpose of disrupting discourse. Some "trolls" wish to defame people and destroy reputations, some wish to discredit certain ideas and concepts, and others simply want to make spectacles of themselves through brute heckling.

The definition of astroturfing from Wikipedia reads: "The goal of such a campaign is to disguise the efforts of a political or commercial entity as an independent public reaction to some political entity-a politician, political group, product, service or event. Astroturfers attempt to orchestrate the actions of apparently diverse and geographically distributed individuals, by both overt ("outreach", "awareness", etc.) and covert (disinformation) means. Astroturfing may be undertaken by an individual pushing a personal agenda or highly organized professional groups with financial backing from large corporations, non-profits, or activist organizations. Very often the efforts are conducted by political consultants who also specialize in opposition research." ~~Wikipedia~~

Posted by GrannyStandingforTruth at 1:46 PM 10 comments: 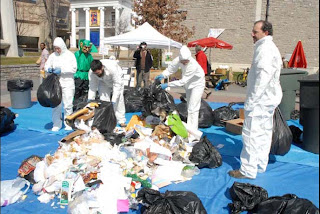 Nothing burns me up more than stereotypes. Why? Because I recognize the danger in them. You would think that an educated Fire Captain would recognized that too and not buy into them, but apparently Captain Brian Beckmann of Miami Dade Firefighters believes in them enough to make this statement regarding Trayvon's parents:

Some people lack compassion for others in their hour of grief. These people are still grieving over the loss of their child. I've lived a long time, but I never thought the day would come when people would say some of the cruelest things in situations where families are grieving over their loved ones. Some folks don't even allow families to grieve in peace anymore. They'd rather pile on more hurt and pain.

Okie dokie!  So, I wonder if the good Captain can tell us what type of parents George Zimmerman has?

While he is at it, I wonder if he could tell us what type of parents Representative Allen West has?   Because West is crazier than a road lizard.  It's obvious every time he opens his mouth.   I'm waiting on his scandal to come out.

Well, for the umpteenth time, the Senate plans to bring a bill to the Senate and discuss racial profiling.  Good luck with that considering the makeup of the House of Representatives.
Posted by GrannyStandingforTruth at 6:54 PM 13 comments: