A Felony Will Get You Probation If Your White In America

Today, I read the article regarding the "Fake Acorn Pimp's" sentencing. Yeah, he got a slap on the wrist and a chump change fine that more than likely is lunch money to him. I'm sure the $1,500 fine he's been ordered to pay won't make a dent in his wallet. It probably won't even make a slight crease. He'll probably do his community work at some pristy church in some upscale neighborhood, and probation in his case does not mean a thing. Only in America are white kids allowed to commit a felony and get sentence diverges compared to those bestowed upon brown and black skin kids.

The "Fake Acorn Pimp" was instrumental in the Senate cutting off funds for an organization that helped poor people, smear and slander job that caused ACORN employees to be added to the unemployment list, a help resource for poor people to be eliminated, and attempted to wire tap a United States Senator's government office telephones. In addition, he edited a tape and presented a phony one of ACORN that caused the big mess in the first place.

Yet and still, the sentence he was given is an injustice to ACORN whose organization doors were closed. Because of his fake tape, fake hoe and pimp outfit, and a conversation that never took place, ACORN's federal funds were cut off behind lies and deception that James O'Keefe and fake hoe created. Nevertheless, he gets what is known as the traditional slap on the wrist and a chump change fine. However, us brown and black folks already knew what the verdict would be in the case of O'Keefe.

Although, this is nothing new in America if your not brown or black skinned people. O'Keefe won't get the felony label that is issued out like free tickets to the circus. We all know that had he been black or brown he would have been singing that tune they sing when baseball player hits a baseball out of the park-bye,bye baby! And some white folks wonder why black and brown people get all puff out of shape and complain about the sentencing system in the courts of America. Puleeeeeze!
Posted by GrannyStandingforTruth at 6:38 PM 3 comments:

The Apple Don't Fall Too Far From the Tree

Father and son both have antebellum views concerning black people. Yup! Talk about longing for the old days, well...the Pauls don't believe in Civil Rights for minorities. Rand Paul believes that private businesses should be allowed to discriminate against minorities if they choose too. Seeing how many jobs are in the private sector, most restaurants, housing rentals, as well as stores are privately owned that leaves only government and public places that blacks should be allowed.

Will Rand Paul be suggesting to dismantle the Civil Rights Laws altogether next? How can a person run for a public servant office representing "the people" when he feels that "the people" only means people of a certain color-white only? Yet and still he claims to believe in Civil Rights and that discrimination is wrong. That is straight up BS! You don't straddle the fence on Civil Rights. Your either for them all the way or not at all. There is no half way regarding discrimination and Civil Rights.

Paul even went on to compare the right to bring a gun in public place to Civil Rights, which I found rather odd seeing how guns kill people and Civil Rights grant people human rights. What does a person need a gun for to go into a restaurant to eat. I mean it is not like they have to kill the food that they order first. Guns should be for hunting and that is the bottom line. However, some people think that we should go back to the days of "Gunsmoke" and be able to pack a gun in a side holster like they did in the Wild Wild West days.

Apparently, that is not the only thing that Rand Paul believes needs to be done to make America more suitable to whites like him taste.

I've been warning people about Ron Paul for a while now. Now, it looks like not only should people be keeping a eye on Ron but they should keep an eye on his son Rand too because the apple doesn't fall to far from the tree. We already know Ron Paul's views on black people. I'm sure he taught his son everything he knows, including his hatred for black people.
Posted by GrannyStandingforTruth at 6:43 AM 9 comments:

" Arizona the Whites Only State"

Face it, schools just want your children only to learn about dead lily, white Europeans as if the world was invented by them, and as if they created this universe. What are the other kids supposed to think? We should have one curriculum for all kids, and that should be to include all great thinkers from all over the world of every color, not just white, to give everybody a sense of human pride. For some reason Arizona and their Governor is more committed to abolishing anything that is non-white.

The point of public education should be "to teach everyone the same curriculum",which includes non-white people's contributions as well. It's easy for white folks to say that we should eliminate all ethnic studies programs when their ethnicity is dominant. The Ethnic classes success is based on inculcating a sense of pride in one's history and culture.

Is the governor using the right rationale by depriving non-white kids of a program that gives them a sense of identity and pride. Go to any major U.S. city and you will find Little Chinas, Italys, Russias, Israels, Egypts etc ... You can't--and shouldn't--suppress people's connection to their heritage and history.

I also think it's disingenuous to call for the abolition of ethnic/cultural studies programs when the kids in those classes are being bombarded with white culture every single day non-stop. I wonder when she plans to sign a Eugenics law? How long before they go all the way, and just outlaw non-whites?

Making laws and banning is and attempt to humiliate and denegrate these people simply because they are hispanic/Latino. I knew it wouldn't be long before they start whitewashing history again. I mean come on now, Texas is already trying to rewrite history and they have deleted all minorities out of the new version. Therefore, only white folks exist, all others are non-existent, noncontributers, and we people of color are a figment of our own imagination.

Well...next,I guess, Arizona and Texas will put up their "whites only" signs. In essence, they already have with this new law and revisionist books. This is just a modern version of "whites only" if your peel the accessories off it and take a good look at it. It's time to boycott Arizona, and I wouldn't even drive through there, especially, if you not white.
Posted by GrannyStandingforTruth at 11:40 PM 5 comments: 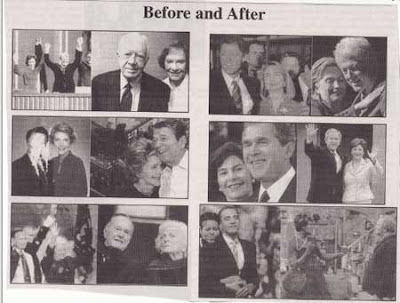 White folks don't know when to quit with their BS. First time in history we have a black president up in the "White House", and we're being flooded with racist messages and another old-time message that blacks are considered entertainment to white folks.

Always throughout history they have worked hard at degrading black people with cartoons, in movies, plays, etc. They considered blacks their sick entertainment, and it is sick, because they made fun of black people at the expense of black's dignity and respect. Although, it comes a time when you have to ask the question why do they go out of their way to denigrate black people?What are they afraid of? Why is it necessary to continuously work at denigrating a whole group of people?

President Barack Obama is an intelligent man. He graduated from Harvard with honors and was over the Harvard Law Review. Since he has been in office, he has accomplished something no other President was able to do, and that is pass health care reform. The "Smithtown Messenger" doesn't seem to think too much of the President because they printed pictures comparing past Presidents, and depicted President Obama as Fred Sanford, and I guess Michelle Obama is supposed to be Aunt Esther.

Funny, they have Hillbilly Granny and Ma Kettle(Palin and Bachmann) and all these white folks running around with teabags hanging from the their hats,wearing costumes from the 1700's, and whites doing all sorts of silly ass, ridiculous stuff, and they have the nerve to want to consider black folks as their entertainment. Puleeeeze!

President Reagan was a figurehead up in the White House. We all know he was senile and a fortune teller was really the President. Yet, they heap praises on him like he was so spectacular. Shouldn't they be giving that so-called praise to the fortune teller? Not to mention, Reagan's tickle down economics along with Bush Doofus's economic policies were what got us in the mess we were in. You know the mess that President Barack Obama is pulling us out of, and accomplished turning our economy around.

Again, you have to begin to ask the question why is it so important to them to denigrate black folks? What are they afraid of? Is it because of all those myths they made up about black folks lacking intelligence or leadership qualities or all those other little falsehoods that are coming to the light for everyone to see that white folks are scared of serious competition?
Posted by GrannyStandingforTruth at 8:28 AM 8 comments: